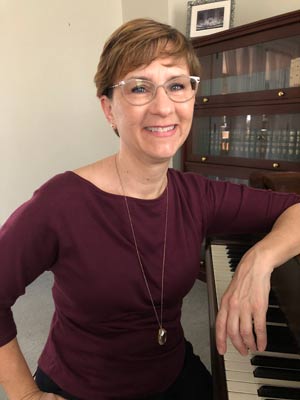 Karen Forrest directs the Sarah W. Gibbons Middle School Eighth Grade Band, Jazz Band, and the Westborough Schools Wind Ensemble. Other ensembles in the Westborough Public Schools she has worked with include the Sixth Grade Band, and more recently, the Westborough High School Festival Jazz Band. Concert and jazz bands under her leadership have received superior ratings at numerous state band festivals. In addition, the Gibbons Middle School Wind Ensemble was invited to perform at the 2005 and 2009 Massachusetts Music Educators Association All-State Conferences in Boston.

A native of Shrewsbury, Karen earned a Bachelor of Music degree from Boston University, where she was a student of Ralph Gomberg, Principal Oboist of the Boston Symphony Orchestra. She earned her Master of Music degree from the University of Massachusetts at Lowell, where she also completed her certification in Orff-Schulwerk pedagogy. Karen began her teaching career in New Hampshire, and also taught in Concord and Littleton, Massachusetts. In 1992, she became Band Director at Queensbury Middle School near Lake George in New York. During her tenure there, she was invited to direct the 1997 Saratoga-Warren All-County Junior High Band. She was guest conductor of the 2007 Quabbin Valley Music Educators Association Middle School Concert Band, and of the 2010 MMEA Western District Junior Jazz Band. In spring of 2015, Karen earned Supervisor/ Director – Core (Arts) Licensure through the Massachusetts Department of Elementary & Secondary Education.


The Massachusetts Instrumental Conductors Association's Paul Smith Hall of Fame Award is presented annually to a Massachusetts music conductor who is a musical and personal inspiration to students, the community and other professional conductors. Admission to the Hall of Fame is limited to two conductors per year.

In presenting this award, the MICCA Executive Board wishes to recognize persons who best represent the high personal, musical, and professional teaching standards of the late Paul Smith, Sr., former Director of Music in the Abington, Massachusetts, Public School System.

The criteria for the award is as follows

MICCA wishes to honor worthy educators with this award and asks fellow music educators to be a part of the process. You are invited to nominate someone who has the qualifications and you feel is deserving.

Nominations will be accepted until December 1st, of each year.